Last few weeks I’ve been asked a lot “Why do you teach science?” It’s odd because until recently I had not been asked that question. The reason has a lamer (is that a word) and less deep than the answer to why I enrolled in education school (it was an accident, I was pre-law and they messed up my schedule). So I’m a science teacher because 3 yrs ago I was beyond stressed. I teach 6th grade, which in state of Alabama is technically elementary. So I could teach any subject because I have elem certification. Could, but it’s not wise for anyone to make me an ELA teacher. Reading, I can do, but it’s the rest of it I cannot wrap my math/science/tech brain around, I do well just to send a tweet without a typo. Anyway I was a math teacher. I really love math so I was excited to teach it. But after a couple of years the stress of meeting all requirements, testing, kids who already hated math, and a group of complaining parents during my tenure year when I had just had a baby and was finishing my thesis for Ed.S. was too much. So my principal gave me the option of teaching science the next year. Took me 3 weeks into the next school year to realize I just got the break of a lifetime.

You see, there is only one science standardized test in Alabama and that’s in 7th grade. Doesn’t weigh heavy on AYP either. Now don’t get my wrong, if you’ve read my blog over this past year you know my job is not stress-free. I (un)fortunately I care whether or not they learn but it’s just a little easier without that stupid test hanging over my head. Without the test being my focus I get to have a new focus: Teach my students to be scientist & ask questions, teach importance of space exploration, teach students to preserve our Earth for future generations, and last teach them survival on this Earth. 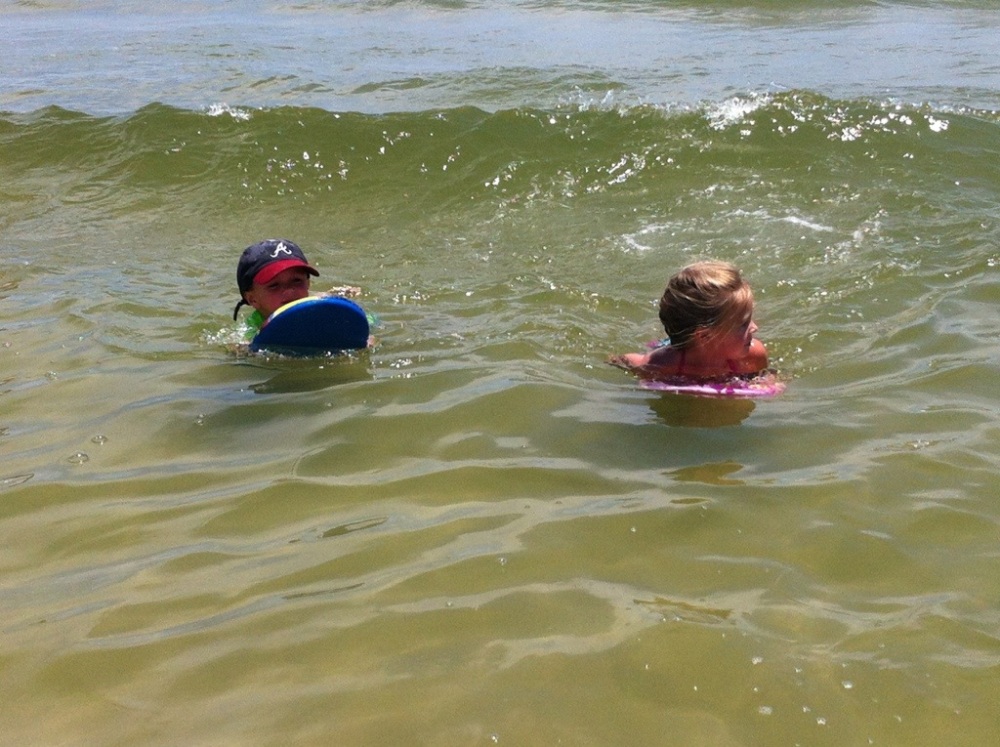 So this week we are at the beach. Those that know me know that the ocean is my real home. Like Buffett says “the sea’s in my veins.” I’m not a son but I am a daughter of a son of a sailor. Close enough, right? When we walked the kids out on the beach the first thing I looked for was the sand bar & breaks in it. You see, rip currents are caused by breaks in the sand bar. Water is trying to get back into the ocean, it finds a way back out through that break. Think pulling the plug in tub, all water rushes to drain. So anyway first thing I do is point out the break to my kids and explain to stay away because of rip currents, they know this stuff because its common discussion. I see a family swimming in the area of the broken sand bar and out of mouth flies “Didn’t their 6th grade teacher teach them about rip currents?” Of course all adults standing there said probably not and looked at me like I’d lost my mind.

I take a day every ocean unit and discuss with the kids rip currents. Odds of my students going to beach are pretty high so to me it’s important. To me if just one actually listens and remembers how to look for them as well as how to escape one, my job is awesome, right? May not be solving for X or finding the main idea, but X could be death or main idea could be surviving vs drowning.

April 2011, I made my students blog about their safe place during a tornado. They complained it was lame. Mostly because many of them didn’t know. So they had to ask their parents, middle school kids aren’t fans of talking to their parents. On April 27, 2011 at 5:30 a small tornado came within a few miles of school and caused damage to a few of my students’ homes. By the end of the night our state had been hit by 59 tornadoes, the largest outbreak of EF5s, well tornadoes period, in history, and 238 people had lost their lives. A week later when we finally got back to school, students blogged about that day and the majority of them blogged about being in that safe place that day. I remember reading the posts and literally breaking down at their reflections of that day (as well as the volunteerism they participated in in the days afterwards).

You see when we take away the stress and the pressures of the tests out we get to do so much more. We get to focus on life. Yeah it’s easier for me because Earth/Space science does effect their lives more but I could just make it about facts. I could ignore the human part of it. But I choose not too. I hate when teachers focus so much on “preparing students for the future” mostly because when they say that they are referring to tech, and we all know tech we are using today is not even close to the future. But also because why can’t we just prepare students for life? Life today. Life tomorrow. Life later this month. Then eventually life in the distance future. In the hall outside the front office at my school has this quote:

“Education is not preparation for life; education is life itself.” – John Dewey

Kids live today. They don’t live in the future. We need to focus on both. If we educators spent as much time worrying about our students instead of what’s on the tests they will learn so much more. I also can bet it may not be obvious at that moment but they are listening and they are learning exactly what they need to. I’m glad I don’t teach math anymore because if my focus was on finishing standards on time & preparing for tests, I sucked. And you really shouldn’t do things you suck at unless you have a plan to grow & get better. I know if I taught math next year, my focus would be completely different than it was last time. I’d totally chill out more & take the time to nurture the students’ learning as well as focus on their “today” lives not their “future-you-must-know-this” lives.

I don’t know, maybe I’m off base with this. If I am, I’m sure someone will call me out. I’m ok with that. And hey, who knows, none of my students may even remember my rip current lessons.